A friend shared a Facebook live post from the NY Times. Conor Oberst was playing music from his latest release Ruminations into what appeared to be a cell phone feed. A cell phone. Pretty damn folksy. After he finishes playing one of his songs, he barely moves the harmonica away from his mouth when the interviewer asks him “what are you listening to these days?” and “Miwi La Lupa” comes flying out of his face without even a second of hesitation. Which begs the question- “who the fuck is Miwi La Lupa?”. That also makes a great tee shirt- you’re welcome Miwi.

I dig around for a little bit and find Miwi fairly easily. Twenty minutes later we’re trying to figure out where to meet so I can figure out this guy’s story. Miwi suggests St. Dyphnas, a bar in the East Village on St. Mark’s Place that opens early and closes slightly earlier. Also they have burgers. It turns out Miwi actually met Conor here, they became fast friends and ever since it has served as a sort of nexus for them both, even warranting its own song “Till St. Dymphna Kicks Us Out” on Oberst’s new album. These guys actually live together now, so Conor’s suggestion that he’s “listening” to Miwi La Lupa is a bit of an understatement. Their socks are also getting mixed up in the wash, out in some laundry room in Omaha. But more on that in a minute.

When I show up at St. Dyphnas midday on a Friday, there are a few people sitting around, not really getting after it, but just sort of absorbing some of last night’s beer musk emanating from the well worn wood floors. One guy looks deep into his pint, examining the dog’s hair. It’s not some kind of a dive bar by classic NYC standards, but you can tell nobody here is an amateur drinker, either. Miwi walks in and greets the bartender. It looks like they haven’t seen each other in several minutes. Pints are ordered, we say hello and a conversation starts- but not in any particular order. Things just kind of… happen. We’re somehow already past the small talk before we speak, and move quickly to playing best-friend bingo- “you know so and so?”. We end up having some so-and-so’s vaguely in common. Also we need another pint. I explain to Miwi that I wanted to meet him not just to figure out his connection to Conor Oberst, but also because it occurs to me that artists recommending artists is a great way to accelerate music discovery. I discovered Miwi ( who is excellent, it turns out) through Conor, so perhaps Miwi could “Play it Forward” and recommend three artists, and they might refer three, and so on. Miwi is game, and you can listen to his three artists and Conor in the playlist below as you read the interview after the jump.

M: Yeah, I’ve been living there for about a year.

J: Omaha is great, I’ve got a lot of friends there. Mostly poets and writers. Just fucking good people.

(EDITOR’S NOTE- LOUIE M’s BURGER LUST IS NOT ONLY THE BEST BURGER JOINT IN OMAHA, BUT ALSO THE WORLD)

M: It reminds me of my hometown.

J: How is it similar?

M: Same size, good people. Blue collar, good food, very passionate about their sports. A lot of our friends out here are either from Buffalo or Omaha. It’s a midwest kind of thing.

J: So you met Oberst, and you put your first record out on Team Love, and you recorded it in Omaha?

M: No, the first record was recorded here in my bedroom in Brooklyn. I was on tour with his band down in Mexico and I was playing them some new song I had written, some demos, and he was like “I want to produce this record.” So we did it. We recorded last summer out there for a couple of weeks. We were joking like “you should move to Omaha… haha yeah right” and sure enough, a couple months later, I packed up my shit and moved to Omaha.

J: I almost moved to Omaha in ’98. It was a dark place in my life, and my Omaha people were trying to convince me to move out. They’re like “life is easy, shit’s cheap, get a motorcycle.” I thought “Goddamn, that’s the best pitch I’ve heard in a long time.” But I didn’t do it.

J: And it was basically just chasing your tail for a decade?

M: No, I think the last three years it kinda changed, where I didn’t like being a freelancer anymore. I wanted to write songs, I wanted to do my own thing. Within months of moving to Omaha, because it’s so cheap, I was in Europe on a month-long solo tour. I couldn’t do that if I was in New York. Rent is too damn high.

J: Too damn high is right.

M: I mean, New York wasn’t bad to me. Sure, it’s bad to everybody, but I made a living playing music and I played with everybody out here. I made a living with the trombone and bass trumpet, singing backups, played the Garden…

J: Who did you play with at the Garden?

M: I played with Spoon two nights at the Garden. They were opening for Arcade Fire.

M: Just another gig. It payed well, cash. Honestly, those kind of big concerts, when the lights are off, you only see maybe the first 20 rows of people, so it feels more intimate than a small club when people are in your face. You feel more nerves when you’re in a small club.

J: So how is your music coming along? I discovered you this week. I’m like 2 days into this.

M: Well you have some catching up to do.

J: “I Yield” immediately stood out and resonated really clearly, especially right now, in this election cycle. Where did that come from? I would love to hear your process on that.

M: I would love to hear it too. I don’t know, I just write. No one knows who I am, so I can write whatever I want. And I write mostly love songs. It’s all love songs, really. But I live in the hood, so just getting on the train, your eyes and your ears and your heart are open. Living in the city, riding the trains, giving homeless people a dollar, and you pass people of privilege or wealth with their nose up in the air. It makes you think. Meanwhile you’re struggling, you’re going to work, and you’re just thinking “I’m giving this dude a dollar.” I don’t know.

J: You don’t have to know. It’s an unfair question, to be honest.

M: I feel like whenever anyone asks me about the song, it’s like… the answer is right there in the lyrics.

J: You don’t have to explain where an idea comes from, because nobody has the answer. But when somebody hears something that sounds true, they want to dig deeper. They want to triangulate that truth. It’s a selfish desire to understand ourselves.

M: I mean, I just put a couple chords down…

M: I think it’s pretty simple. You have to yield. That’s the reality. Someone’s going to walk by you with this history…. It’s like okay, I’ll get the door for you… no, after you. I don’t know if it’s learned or if it’s just who you are as a person. But I still try to find a way to make it a love song.

J: This election has got me so fucking crazy. I feel like I need to be medicated.

M: I was just talking about this with a girl last night. She kept saying “But it’s 2016” like… I don’t care what year it is. People are always saying that, but nothing changes.

M: Right. We’ve come a long way, but guess what? We’ve only gotten to the moon, and there’s still a whole galaxy out there.

J: You’re living in Brooklyn, you’re spending 130% of your take-home income trying to find 15 minutes to do the thing you love and you can’t, for a decade, and you have to ask yourself if this is a model for what everyone should be doing. And if you’re honest with yourself, you say no. And if you’re a dishonest “leader” you think yeah, that’s a perfect model. It really doesn’t seem like a bad deal for them at all.

M: I recently had a migraine for about a month, out of nowhere. I used to have insurance but I don’t have it now, because there was an overlap moving to Nebraska and I couldn’t sign up with Obamacare. I was talking to my friend in Germany, and she was like “how dumb is it that you can’t just go to the doctor and get it fixed? So you can go back to work, go back to life.” But that’s not the country I live in.

J: I spend more on healthcare than the average person in Spain makes in a year.

J: Valencia’s dope, that’s where I go. You should post up there and make some music for a little bit.

M: I’m always looking for a place to go and write. I write in my bedroom or anywhere, but I want to find a place that’s beautiful and inspiring. Some place that’s warm in the winter time.

J: I had horrible SAD my whole life. Then I studied people that are happy. I figured if I want to be happy, I should be like people who are happy.

M: So how do you know if people are happy?

J: So I was thinking that I should start this thing where artists refer artists. Conor put me on to you, your music is great. It would be great if you would refer 3 people… I’ll go talk to them and they can refer 3 people, and we’ll get a chain going.

M: Okay, well Grey McMurry is local. I love his music. We had a band for many years. He’s always been a great songwriter and musician. Easily top 5 guitar player. We had a band called Knights on Earth so there’s some records there. I’m still waiting for his solo album …Are you still recording?

M: [speaking into recorder] Grey, I want that record, goddammit. [back to John] It’s done, I think. He’s been working on it for a couple years.

J: I don’t even understand how people can do that. Work on something for years.

J: What kind of music?

M: Elizabeth Ziman of Elizabeth and the Catapult is one more. Or We You is one of my favorite bands here in New York. Jessica Hume and her husband Nate Wood. They put out a record a couple years ago that’s one of my favorites. Nicest people, great musicians, they’re the best. But not in a Trump-ian way.

M: All the people I mentioned are here in the city, so you can go talk to them. 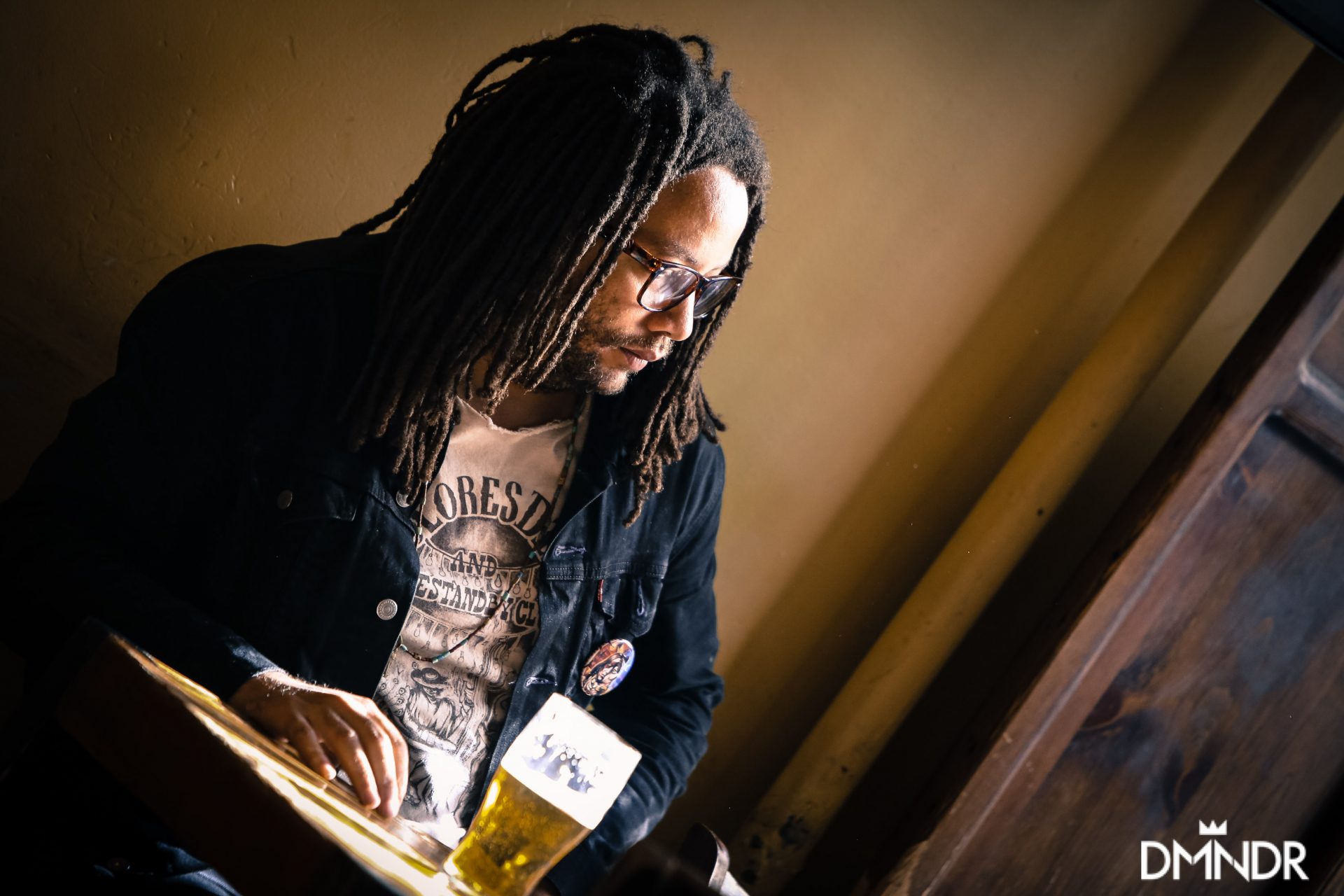