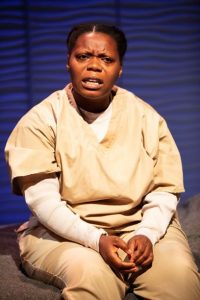 Emma and Max opens with a silent, exhausted Brittany, adeptly played with glorious subtlety by Zonya Love, as she sits with the wealthy New York couple who are about to fire her from her most recent nanny gig. Brooke, the wifely half of the duo, is suffering high anxiety due to the exchange, anxiety that raises an eyebrow since she is the decider of Brittany’s fate; she could keep her around if she wanted to. Ilana Becker plays Brooke with simpering delight, and finds the humor that softens Brooke’s unnerving ignorance. Jay, her husband, played with an underscore of rage and shuttered emotion by the always wonderful Matt Servitto, stoically bears the brunt of the trauma they are about to inflict upon their unsuspecting, soon-to-be-former employee. When they deliver the news, Brittany erupts into a series of pathological convulsions that dictate the course of the rest of the play. 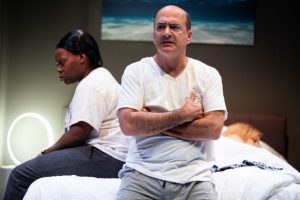 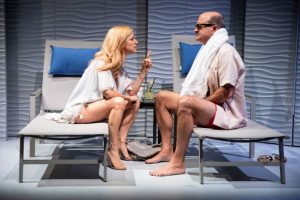 After the unpleasantness with Brittany, we follow Brooke and Jay as they recover on vacation in Barbados. In the onslaught of Brooke’s narcissistic regret, we listen to her talk about how hard it is to be white, and to grow up overweight and ugly, and to be so misunderstood (notwithstanding the fact that, today, she resembles a movie star and has enough money to take extravagant vacations and hire and fire childcare workers like she’s picking out bruised fruit).

Later, while Brooke sleeps, we learn of Jay’s many myriad struggles in life; he doesn’t love his wife, hates lazy employees, and is angry that his parents made him pay his way through Princeton by working at McDonald’s. Genuine tragedy has not yet struck this pair, but neither Jay nor Brooke seem to realize it. To them, the superficial underpinning of success is the ultimate in suffering. Until it isn’t.

Finally, when the shallow tide of white privilege is at its lowest, we come face to face with Brittany, who holds the key to the crux of the play: the experience of being an illegal immigrant in America and working low paying, thankless jobs (of which we get an exhausting metaphorical taste in a rather hypnotizing, if drawn out, set-change flare). Brittany’s story, delivered, as most of the play is, in long-form monologue style, is the home-hitter, the heart-breaker, and provides us with the eternal juxtaposition of the privileged versus underprivileged experience. Zonya Love gives a performance of astonishing exactitude as she carries the weight of the playwright’s truth-telling on her world-weary shoulders. She delivers painful reality with simplicity and beauty; she quietly shows us the map of pain, regret, and injustice.

The material is difficult, and the actors do a superb job. Solondz directs them in his classically passive-aggressive style, bringing out their deeper notes, and allowing what could be a garish display of absolutes to become a discordant symphony of America’s extremities. Emma and Max closes on October 28. 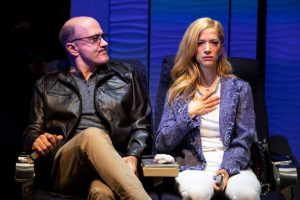